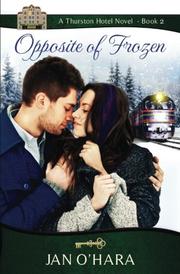 From the The Thurston Hotel Series series, volume 2

O’Hara’s debut romance stars a former Major League Baseball superstar with a major chip on his shoulder, a woman with an aversion to commitment, and a raucous crew of elderly vacationers.

In the second book of the Thurston Hotel series, our romantic heroes meet-cute on a tour bus containing 50-odd senior citizens, headed for Golden, British Columbia. Oliver Pike, 28, is the straight-laced tour guide who’s running the bus company temporarily for his sick brother. He discovers Page Maddux, 25, an orphan who attempted to stow away in the bus’s luggage compartment because she didn’t have money for bus fare; it was so cold inside that it left her as blue as the dyed streaks in her hair. Although she thaws relatively quickly, she finds herself squashed between two scantily clad seniors, Mavis and Avis, who debate the ethics of “checking if the collar and cuffs match.” It takes longer for Oliver’s icy temperament to warm up. When a winter storm strands the entire group in Harmony, Alberta, Oliver hires Page to help wrangle the pensioners. Although the younger couple’s will-they-or-won’t-they plot is good fun, it’s the “oldsters” who are the real heart of the novel. They include Mr. Dubois, an impeccably dressed resident “geriatric sex machine” who specializes in “horizontal crocheting,” and Mr. Lee, an elusive vacationer who later reveals unusual skills and a dry wit. O’Hara shows a mastery of situational comedy, as when 95-year-old Mrs. Horton snoozes through Page’s erotic dancing debut at the Wobbly Dog, as well as tragedy, as when Mavis and Avis deliver some heartbreaking news. All the while, Page is on the hunt for a mysterious man who stole her backpack from the luggage hold, and Oliver gradually copes with the accident that ended his baseball career; both make for nice subplots. It all leads up to a finale involving a seedy man with a snowmobile, snow kayaking, and, naturally, a marriage proposal. If O’Hara’s next books are anything like this one, she’s got a long career ahead of her.