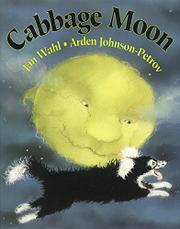 This fantasy from Wahl (The Singing Geese, 1998, etc.) suffers from disjointedness; far too many of the sentences are crafted to be pretty rather than to tell a story. Old Cabbage Moon may be a bit on the ratty side, but Jennie the dog and her owner, Princess Adelgitha (a contemporary girl) love it very much. They delight in its moonglow and are protective of it; when a “prince” comes to mutter poetic observations, Princess Adelgitha goes face-to-face with the boy to proclaim, “I happen to know it is a cabbage.” Then the miser Squink snatches the Cabbage Moon from the night sky and makes off with it. Jennie and Adelgitha pursue Squink to his lair; Adelgitha, who has given chase on stilts, gets tangled in some tree limbs, so it is up to Jennie to save Cabbage Moon, and return it to a heavenly orbit. The connection between characters is scanty and the action is abrupt, more the stuff of a nonsensical limerick. Johnson-Petrov’s evocative pastels strive to bring continuity to the pages, but the book exhibits none of Wahl’s usual skill. (Picture book. 2-6)