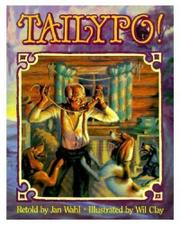 In his first picture book, Clay provides dramatic double- spread paintings for Wahl's lively retelling of this scariest of African-American tales. Each detail of the Tennessee cabin where the unfortunate who makes the error of eating the tail of a mysterious invader awaits his grisly fate is carefully rendered, bathed in the open fire's crimson glow, while a woman's portrait observes with a curious ``I-told-you-so'' look and the owl on the clock recoils in dismay. The thing itself remains indistinct, just the occasional ear or claws glimpsed—the better to terrify by innuendo. Galdone's version (1977) is a standard; this fine debut makes an excellent alternate. (Folklore/Picture book. 5-10)