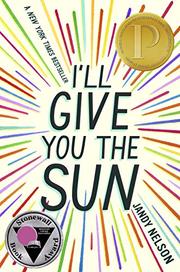 I'LL GIVE YOU THE SUN

Twins Noah and Jude used to be NoahandJude—inseparable till betrayal and tragedy ripped them apart.

Nelson tells her tale of grief and healing in separate storylines, one that takes place before their art-historian mother’s fatal car accident and one that takes place after, allowing readers and twins to slowly understand all that’s happened. An immensely talented painter, Noah is 13 1/2 in his thread, when Brian moves in next door to their coastal Northern California home. His intense attraction to Brian is first love at its most consuming. Jude is 16 in hers, observing a “boy boycott” since their mother’s death two years earlier; she is also a sculpture student at the California School of the Arts—which, inexplicably, Noah did not get into. Haunted by both her mother and her grandmother, she turns to an eccentric sculptor for mentoring and meets his protégé, a dangerously charismatic British college student. The novel is structurally brilliant, moving back and forth across timelines to reveal each teen’s respective exhilaration and anguish but holding the ultimate revelations back until just the right time. Similarly, Nelson’s prose scintillates: Noah’s narration is dizzyingly visual, conjuring the surreal images that make up his “invisible museum”; Jude’s is visceral, conveying her emotions with startling physicality. So successful are these elements that the overdetermined, even trite conclusion will probably strike readers as a minor bump in the road.