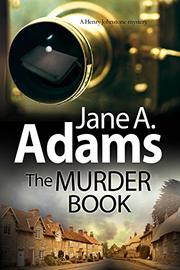 by Jane A. Adams

A murder detective from London stalks a killer in rural Lincolnshire.

Employment is scarce in the country village of Louth in 1928. Boys like Ethan Samuels and Frank Church can find work on farms like Elijah Hanson’s. But town-bred men like George Fields often have no choice but to go to sea. And while George is away, his wife, Mary, finds herself with too much time on her hands and too little money. She addresses both problems by exchanging her favors for cash. So when someone bashes Mary’s head in, there are some in the village who say it’s no more than she was asking for. But killing 7-year-old Ruby and George’s young cousin Walter in the bargain is a step too far. Even Acting Chief Inspector Carrington agrees that it’s time to ask for help from Scotland Yard. What Carrington doesn’t bargain for are the modern methods championed by Chief Inspector Henry Johnstone and his sergeant, Mickey Hitchens, who come equipped with a murder bag filled with fingerprint powder and the like and a murder book for logging in evidence—like the button that looks suspiciously like the others on Ethan Samuels’ shirt. Johnstone’s methods may be modern, but will they be effective? Adams keeps the reader guessing until the end, and maybe even a little bit past.

The creator of Naomi Blake (A Murderous Mind, 2016, etc.) and Rina Martin (Forgotten Voices, 2015, etc.) launches a new series with a pair of murder specialists who are worthy additions to the world of period detection.