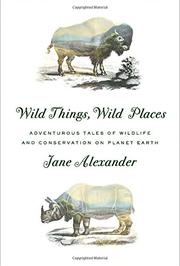 Adventurous Tales of Wildlife and Conservation on Planet Earth

The stage and screen actress delivers a memoir focused on her wildlife conservation work.

When she was the director of the National Endowment for the Arts in the mid-1990s, Alexander (Command Performance: An Actress in the Theater of Politics, 2000, etc.) famously butted heads with Speaker of the House Newt Gingrich, who was attempting to eliminate support for the arts from the budget. Less well known are the author’s activities in support of the conservation of endangered species. In her second memoir, Alexander chronicles her global travels to remote areas around the world—e.g., Belize, Thailand, Bhutan, Ecuador, Newfoundland, Madagascar—in search of rare wildlife. She describes accounts of the illegal, wanton killing of rhinoceroses for their horns, which are used in traditional Chinese and Indian medicine and sell for as much as $100,000 on the black market. In Thailand, the government imports elephants to satisfy the tourist trade while, at the same time, vast networks of corrupt government officials permit the “slaughtering of tigers and other wild cats to supply the Asian trade in body parts.” Alexander couples this grim picture with enthusiastic accounts of the exotic birds and animals she has seen on her global travels, and the transitions can be jarring. She begins with a report on a 1982 trip to the still relatively undeveloped “birder’s paradise” of Belize, where, despite no sightings, she was thrilled to hear the “deep guttural cough” of a jaguar. The author also describes birding in Peru and recounts the experience of being greeted with a welcoming ceremony by New Guinean villagers in traditional costumes. While many readers will share the author’s concerns about conservation, Alexander provides few new insights into the people and places she has visited, and the narrative hops from place to place without enough connecting elements between the anecdotes.

A laudable effort that meets with mixed success.