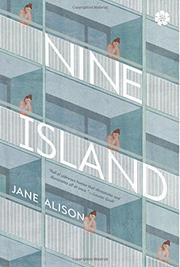 This immersive, cerebral novel centers on J, a woman teetering on the balance between the concrete, sometimes grim responsibilities of her daily life and an equally urgent personal dilemma: should she “retire” from love and romance?

Memoirist, translator, and novelist Alison (The Sisters Antipodes, 2009, etc.) sets a surreal scene: a Miami beachfront apartment building, a “musty old Love Boat,” where the structure and many of its residents are in the process of death and decay. J lives on the 21st floor in a box-shaped flat with cork floors and mirrored walls. Her building, a large block consisting of smaller blocks, is mirrored by the building across the way, where she witnesses scenes of human connection and disconnection, innocent and otherwise. Everyone in this book is known only by their first initial or their role, such as “my mother” or “Par-T-Boy,” contributing to the sense of disconnection J and the reader experience together. In her cube, J embarks on a project similar to Alison’s own book Change Me (2014), translating sex stories by Ovid into English. As she works, she considers giving up on sex and romantic life after the end of a 10-year marriage and a tour of exes, culminating in one month spent with “Sir Gold,” the one who got away, who doesn’t want her back anymore. Her intellectual life is punctuated by obligatory dates with local suitors, an ailing mother, an incontinent cat, and a newly formed friendship with a neighbor couple. She ventures out to swim laps in the building’s hourglass-shaped pool and walk the beach, where she feeds and attempts to rescue a wounded duck. While narrating her own story, J acknowledges she’s speaking to an audience, but her stories don’t form an epic tale; rather, they are a series of short chapters, elliptical dips into and out of experiences past and present.

Evocative, sad, at times funny, and never completely without hope, a story that studies what it means to be alone later in life.