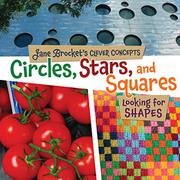 From the Clever Concepts series

The Clever Concepts series gets a new entry that teaches readers about two- and three-dimensional shapes.

As with previous titles, brilliant color photographs provide children with examples of the concepts being presented, all of them emphasizing that shapes are all around us, waiting to be discovered. The first of two loose sections looks at “flat” shapes—circles, ovals, squares, rectangles, triangles, diamonds, and a brief mention of pentagons, hexagons and octagons—the second at “solid” shapes—spheres, cylinders, cubes, cones, rings and eggs. But this latest entry has some troubling problems. While the author uses good vocabulary in some areas, in others, she oversimplifies—for example, never using the terms 2-D or 3-D—or provides what could be described as half-definitions: A sphere is a “solid circle,” while a cylinder “has circles at each end and straight sides in between.” In at least one case, vocabulary is erroneous: A life-saving ring in a picture is called a life jacket within the text. Furthermore, her pictures are not always the best examples. Bricks are great rectangles, but the pattern depicted shows three bricks stuck together, which make a square. She also says that “chocolate candies are all spheres,” showing a cake decorated with spherical candies, but also with M&M’s and chocolate discs, which are hardly spheres.

This just doesn’t stand up to geometrical scrutiny.