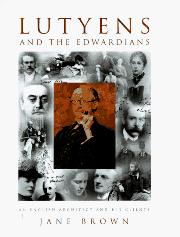 LUTYENS AND THE EDWARDIANS

An English Architect and His Clients

This bland, meandering roster of names, titles, and great houses, though spruced up by handsome illustrations, fails to live up to the elegance of its subject's designs. Best known for the magnificent country houses he built for distinguished members of the gentry, Edwin ``Ned'' Lutyens was the son of a portrait painter. Discovered and promoted by a wealthy neighbor in Surrey, Lutyens, who had demonstrated an uncanny talent for architecture from an early age, received his first commission as an architect (for a ``gentleman's cottage'') in 1889, when he was 20. He was rarely idle after that: The titled and the well- heeled beat a path to his door. ``There will never be great architecture without great patrons,'' Lutyens is often quoted as saying. He built on an ambitious, even opulent scale for several hectic decades. While he designed everything from cottages to tombs, he is best remembered for his elegant country houses: Temple Dinsley, Berrydowne Court, Deanery Garden. He also renovated a number of England's great houses, including Knole, which his romantic friendship with Lady Victoria Sackville afforded him the luxury of doing. His fortunes declined after WW I: His designs passed out of fashion, and some of his old patrons fell on hard times. He died deeply in debt. Brown seems little concerned with dramatizing Lutyens's life, however, focusing here on the lives of his patrons. Unfortunately, her narrative often seems more like a cozy society page studded with the great names of Edwardian society than a historical narrative. Indeed, her book (she is the author of Vita's Other World: A Gardening Biography of Vita Sackville-West, 1986) seems to treat distinguished names as a carefully cultivated landscape to be described without inquisitiveness or excess of passion. With too much text hindering any coffee table appeal, this will likely find an audience only among Anglophiles and DecArts & Architecture diehards. (16 color, 100 b&w photos)