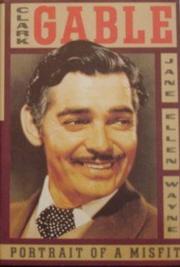 Portrait of a Misfit

The King of Tragedy is discovered behind the King of Hollywood—by the Queen of Trash Bios. In her tenth Hollywood bio, Wayne (Gable's Women, 1987; Crawford's Men, 1988; Ava's Men, 1990; Grace Kelly's Men, 1991, etc.) goes beyond paste-up to embark on self-plagiary. She makes no mention of Gable's Women and simply jumps into rewriting herself, adding clips from familiar scenes about Gable from her bios of his lovers Crawford, Gardner, and Kelly. Is this a new book? Well, maybe, but no page smells fresh. Once more we get the famous fights, the seethings and soothings, dramatized in Wayne's own dialogue, as between Gable and Crawford: ``I'm sick and tired of this Rhett business.'' ``Not if I play Scarlett. We're dynamite together.'' ``Yeah.'' ``You'll insist?'' ``Carole [Lombard] wants the part, too.'' ``Scarlett's not a blonde, for Christ's sake!'' ``I wouldn't know because I haven't read the goddamn book!'' Wayne's Gable is ``an alcoholic, a bland love, a scoundrel, an egotist, and an opportunist who hit the casting couch for a homosexual encounter with a well-known leading man to get into films.'' And he has a tragic mother-complex. The gay encounter, with a friend of gay director George Cukor, later resulted in Gable having Cukor replaced on Gone with the Wind when Gable didn't want his past dug up. But we've read this story in Gable's Women, just as we've read and reread about the star's affairs with Ava, Joan, and Grace, and about his run-in with Marilyn (in Marilyn's Men, 1992). Even Lombard's knitting of a special little sleeve for Gable lacks zip. Wayneland recycled.