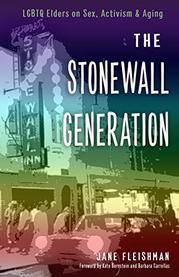 LGBTQ community elders reflect on the decades since the Stonewall uprising.

After conducting an expansive statistical research project on the sexual satisfaction of LGBTQ elders, veteran sex educator Fleishman acknowledges this demographic’s “invisibility,” and she channels her findings into a book of profiles of LGBTQ seniors whose memories and experiences form a moving tapestry of American gay history. Perhaps the most outspoken interviewee is transgender rights advocate Miss Major Griffin-Gracy, one of the few remaining survivors of the uprising and a major influence who has served as a “mother and grandmother figure to countless trans and nonbinary people around the world.” Among the couples interviewed are Bob Isadore and his partner, David Velasco Bermudez, who was inside the establishment that night in 1969 to mourn Judy Garland’s death; and late-stage activist lesbians Edie Daly and Jackie Mirkin, who met in their 60s and married in 2008. Many other contributors—diversified by age, race, and locale—share their opinions on ageism, sex, and their methods of staying true to the integrity of a liberation movement they helped foster. Mandy Carter, a veteran justice organizer, shares her coming-of-age experience as a black lesbian; at 70, she appreciates “the importance of being humble, dreaming big, and taking risks.” Activist Hardy Haberman reflects on a 1964 Life Magazine article about homosexuality that sparked an interest in kink and leather subcultures and the misconceptions about sexual violence involved in those cultures. As Fleishman convincingly demonstrates, these significant voices embody the legacy of a movement for equality, anti-discrimination, and sexual freedom; they also encourage younger community members to take an active role in the preservation of those hard-earned liberties. Though this inspirational volume represents just a small sampling of the community’s movers and shakers, it deserves prominent placement on LGBTQ history bookshelves. Kate Bornstein and Barbara Carrellas provide the foreword.

An indelible collection of wise voices resonating with experience, pride, resilience, and revolution.