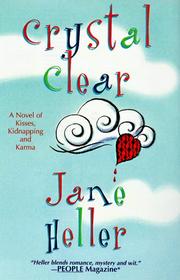 More frivolous, flaky fun (Princess Charming, p. 160, etc.) from Heller, who's quickly becoming the master of the slick urban modern woman's getaway romance . Crystal Goldstein is a Manhattan stereotype: a working woman (in this case, a CPA) of a certain age (about 40) who has no time for anything resembling a life. Her first marriage—to the charming but lazy Terry Hollenbeck—lasted only a matter of months. Now, when she learns that the man she's been dating for years, an unbelievably boring and uptight attorney, has been cheating on her with the ex-wife he's married and divorced twice, Crystal takes the news as a wake-up call. With the help of her New Age-y but loving friend and secretary Rona Wishnick, Crystal (who, in spite of her name, is as pragmatic as you can get) decides to take a vacation at a resort called Tranquility in Sedona, Arizona. Once there, she signs up for the apparently obligatory (according to Rona) Sacred Earth Jeep Tour, a weeklong drive through Sedona's spiritual sites that turns out to offer plenty of forced interaction with the driver/tour guide and the other six tour groupies. To Crystal's shock, she immediately recognizes the driver she's been assigned to—it's Terry, of course, looking better than ever at 43. Worse yet, several calls from Rona reveal that attorney Steven is hot on her trail, vowing to give up his ex-ex-wife forever if Crystal will marry him. Crystal's touring companions, meanwhile, aren't much help: Amanda Reid is a socialite with an attitude as big as her bank account, and the rest of the group includes her entourage (cook, p.r. agent, physical therapist, personal assistant) and a reporter doing a story on Amanda's writer husband, who's penned his first book in decades. What ultimately happens in the desert comes as a surprise only to Crystal. A modern spin on a good old-fashioned Cinderella story.