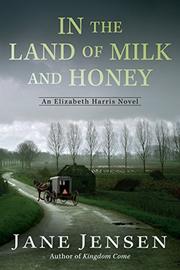 IN THE LAND OF MILK AND HONEY

A detective investigating a series of deaths in the local Amish community finds that her personal ties to the community both help and hinder her work.

During the year since her first case involving Lancaster’s large Amish community—the murder of an Amish teen (Kingdom Come, 2016)—Detective Elizabeth Harris has settled into small-town life—not something she ever pictured herself doing back when she was a New York cop a lifetime ago. Now she even has a steady relationship with a former Amish man, Ezra Beiler. Because she remains close to the Yoders, the Amish family she helped last year, Elizabeth is the first law enforcement officer to pick up rumblings about mysterious deaths in the community caused by what appears to be a virulent strain of the flu. She also hears the rumor that these deaths have been caused by a hexerei, a curse placed on the families by a brauche man, a folk magic practitioner. Word is that former Amish Henry Stoltzfus is seeking revenge on the community for making him choose between his daughter and his way of life. Elizabeth isn’t sure that Henry and a hexerei have anything to do with the deaths and even doubts that the deaths and illness are the flu after all. Working with Dr. Glen Turner of the Centers for Disease Control, she begins to unravel a mystery that leads to the raw milk the Amish have been giving their families. Though Elizabeth tries to stay focused on the case as the death toll mounts, the attention from Glen begins to distract her, especially as Ezra has become strangely distant. She must tread carefully in both her personal life and her work if she wants to learn the truth.

Surprisingly engrossing, with a pace that effectively builds suspense concerning both the mystery and the heroine’s personal problems. Jensen once again spins a seemingly fanciful topic into a solid reading pleasure.