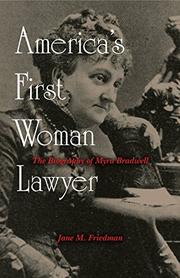 The Biography of Myra Bradwell

A dry, bare-bones biography of Myra Bradwell (1831-94), whose plea to practice law was denied by the Supreme Court because she was a woman, and who went on to become the publisher and editor of the influential Chicago Legal News. In telling Bradwell's story, Friedman (Law/Wayne State University) labors under two considerable constraints. The first is the paucity of original source material (Bradwell's family gave her correspondence with Mary Todd Lincoln—who was a friend as well as a client—to Robert Lincoln's estate, which destroyed it because it dealt with Robert's consignment of his mother to a mental hospital). The second problem is Friedman's apparent wish to fit Bradwell into the politically correct pantheon of feminist heroines. It's true that Bradwell worked hard through her journalism to initiate reforms ``in the areas of women's rights, child custody, the legal system, treatment of persons alleged to be `insane' ''—she was largely responsible for Mary Todd Lincoln's release from the mental hospital—and to make the Chicago Legal News the most widely circulated legal newspaper in the country. But, reflecting her era, she was also an anti-Semite; an elitist; a woman who distanced herself from what she perceived to be the strident and polarizing approach of leading suffragists like Susan B. Anthony and Elizabeth Cady Stanton; and a believer in the ``ethos of `true womanhood'—sensible and devoted mothers, wives, and daughters uniting together to ask of their fathers, husbands, and brothers the right to vote.'' Still, Bradwell's considerable accomplishments are revealed in her own writings, which offer an impressive record of more than two decades of legal criticism, advocacy, and astute business acumen. More legal brief than biography as the personal Myra Bradwell is subsumed in the political figure—but a welcome revival of a forgotten reputation.