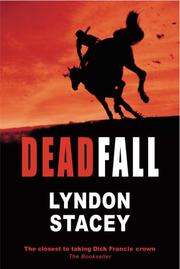 A poky English addition to the Dick Francis Stakes.

Manager of the family estates in Dorset and heir apparent to the viscountcy, Lincoln Tremayne has a somewhat offbeat ambition. He yearns to show-jump big-time as a member of Britain’s Olympic Three Day Eventing team. Until her fatal accident, his mother, too, had been a passionate rider. The spill that killed her soured the current viscount on horses—and on life, too, or so it seems to Linc, whose relationship with his father is painfully complex. Since the Tremayne estate has become a horse-free zone, Linc is forced to stable his mount with the nearby Hathaways. One night intruders break in, steal valuable equipment, and attack Abby, the Hathaways’ 15-year-old daughter, leaving her comatose. Suddenly, Linc must add amateur sleuthing to his résumé. Threats, run-ins with shady characters, and beatings in the Francis manner follow, but Linc remains true to the British resolve bred in his bones. Now, however, it’s an investigation fueled by a shocking accusation from an unexpected source when Abby, recovering consciousness, names her assailant: Linc. Slowly, digressively, things do get sorted out with a little help from a deus ex machina.

Plot without narrative drive, characters short on spark. Heretofore, Stacey (Blindfold, 2003, etc.) has performed well at the track, but this entry’s left at the post.

NOTHING BUT LIES
by Lyndon Stacey
Mystery

NO GOING BACK
by Lyndon Stacey
Fiction

SIX TO ONE AGAINST
by Lyndon Stacey
Fiction

OUTSIDE CHANCE
by Lyndon Stacey