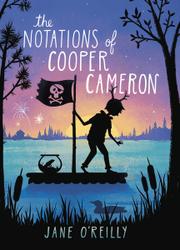 THE NOTATIONS OF COOPER CAMERON

An attentive observer and methodical worrier, soon-to-be–sixth-grader Cooper Cameron learns about resilience as he works to protect those he loves most.

A bittersweet summer tale set in Minnesota, this book will be most appreciated by those who enjoy a thoughtful story. Literally. This narrative is entirely expressed through Cooper’s thoroughly engrossing thoughts, and it’s full of the musings and observations that he records in a small notebook. Two years after the death of his grandfather and the onset of intrusive thoughts about death and his family’s endangerment, Cooper develops patterns and behaviors to ensure their protection, such as reading the words, lines, and pages of books three times over, washing his hands in invisible water, and closely observing everything. But even as he endeavors to keep his family from bursting into flames, Cooper’s behavior worries everyone and puts pressure on an already-strained fault line between his parents and also between himself and the rest of the family. O’Reilly (The Secret of Goldenrod, 2016) delivers a nuanced and empowering narrative that uplifts rather than undermines Cooper’s unique perspective on his world, even as he works to reconcile that perspective with his family’s. The book pulls no punches with regard to the realities of intolerance (even among loved ones) toward neurodivergence while nevertheless validating Cooper’s methods of making meaning as he navigates trauma and grief on his own terms. Racial markers are absent, as is any evidence of racialized experience.