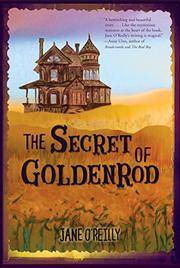 THE SECRET OF GOLDENROD

A young girl and her father, both white, move into a run-down mansion that is reputed to be haunted.

When almost-11-year-old Trina Maxwell’s father takes a job to restore a decrepit Queen Anne mansion known as Goldenrod on the outskirts of New Royal, Iowa (population 397), Trina isn’t thrilled. It’s another move in a lifetime of moves since her mother left nearly eight years ago, and besides, the house is spooky. Things don't get better when Trina enters the fifth grade at the new school, since her classmates have known one another since kindergarten and don’t seem to welcome a newcomer—especially one that lives at Goldenrod. When Trina discovers an old dollhouse and a surprising doll in the mansion’s turret room, she begins to research the first occupants of the house, which include a little girl, Annie, the original owner of the doll. In a pitch-perfect, third-person narration, Trina discovers why the townspeople fear Goldenrod, even as her own fears subside when she realizes the house is trying to tell her something. O’Reilly’s multilayered story is superbly presented. Loss, acceptance, coming together to accomplish goals, facing fears, and overcoming rejection are all bathed in the golden light that is the richness of living.

This solid middle-grade book shines with wisdom and compassion.