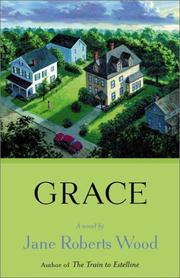 Unabashedly romantic fiction from the author of Dance a Little Longer (1993), this time about a small-town enchantress and her swains, circa 1944.

The few men and boys in Cold Springs, Texas, who haven’t been drafted are madly in love with Grace Gillian, but they all prefer to admire her sensual, careless beauty from a safe distance. Even John Appleby, a handsome widower with whom she shared a night of blissful passion, now keeps her at arm’s length. Grace can’t understand it any more than she can understand why her husband, Bucy, abandoned her without a word of explanation. Everyone seems to think she’s just too different somehow. Why, she painted her house an outrageous shade of turquoise, and she’s forever quoting poetry to the dazzled teenagers in her English class—that’s enough to arouse suspicion right there. Young Bobby Moore has a conspicuous crush on her, and so does his respectable father, not that Robert Moore IV would ever admit it to his wife, a free spirit in her own right and a Yankee to boot. Crisscrossing subplots emerge here, involving Bobby’s unrequited love for the girl next door and his father’s callous disregard for the family’s much-loved black maid, who can’t afford the surgery she needs. Grace is too preoccupied by her feelings for John to notice much of this; she’s annoyed by his standoffishness and his sudden decision to join the Army. On impulse, she takes the train to New York to find her errant husband and meets a dashing military man en route. Smitten Sgt. Dan Manning vows to return for Grace by war’s end. Shortly thereafter, Bucy agrees to a divorce. But here’s the quandary: John Appleby corresponds faithfully, but his dispassionate, careful tone irks Grace. Looks like Dan’s her man, but will he survive to make her his?

A bit much, truth be told, what with all those swelling emotions, soldierly love letters, and lyrical quotes from WWII’s greatest hits.