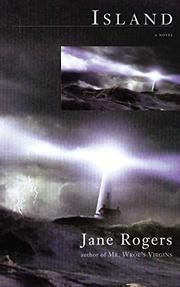 An embittered young woman journeys to a small island in the Scottish Hebrides to confront her past, by murdering the mother who abandoned her as a newborn, in Rogers's brooding, furiously powerful tale (Mr. Wroe’s Virgins, 1999, etc.).

She calls herself Nikki Black, but when her mother left her, in 1968, at the door of a London post office, her name was Susan Lovage. At 29, after years of foster homes and being asked to move on, of learning how to be manipulative and never being quite good enough at it, and after failure upon failure, for hard-boiled Nikki her life has but a single defining moment: being dropped on the doorstep. She hates her birth mother with a warped passion, and when she finally manages to track her down, she all but salivates at the prospect of killing her. The Hebridean island where Mumsy Phyllis lives, Aysaar, is not hard to reach, and Nikki easily takes a room at her house with no one the wiser, but here the plot thickens: Nikki meets her younger half-brother. Calum is an innocent, simple-minded man, content to do little more than comb the shore and collect everything he finds into huge piles around his house, but in him are stories and fables galore, eager to be told. As he takes Nikki exploring all over the island and they pour out of him, she learns also that he has had trouble with Phyllis, an aloof, controlling figure, an herbalist slowly being ravaged by cancer. With her murderous scheme now modified to take Calum away from Phyllis before killing her, Nikki, in a confused state, tries to seduce her brother. From that point on, however, all her feverishly laid plans go awry.

This tale of a madness as terrifying as it is logical, simple and classical in its tragic lines, is also a complex rendering of the art of storytelling, where history and invention seem to purposefully converge, each to transform the other.