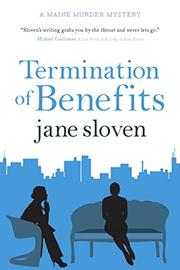 In Sloven’s impressive first installment of a planned series, someone is killing psychotherapists in Portland, Maine, and the primary suspect is another psychotherapist.

Sarah Green was a Boston lawyer with the public defender’s office until her best friend from college, Miriam Moss, was murdered by a criminal defense client. She moved to Portland, got a degree in clinical social work, and went into private practice as a trauma therapist. She also has some psychic skills. She experiences premonitions and can speak with dead people. It runs in the family. Sarah is preparing to accompany Louise Gold, another close friend and fellow therapist, to a court proceeding. Louise is testifying on behalf of Brooke Hart Tate, one of her patients, in a custody dispute. Brooke’s estranged husband, George Tate, happens to be the CEO of Constant Caring Managed Care Company, a health insurance corporation that pays (or, more often, denies payment to) most of the therapists we meet in this narrative. Testifying for George is Dr. Harold Henderson, an arrogant misogynist who treated Brooke and George in couple’s therapy. When Henderson turns up dead in his office, suspicion falls on Louise, who was overheard bad-mouthing him in the court’s restroom. Unfortunately, Louise is involved in a personal crisis (her husband, Mark, may or may not have fallen off the AA wagon) that is causing her to be more secretive and appear guilty. Sloven (co-author: Compassionate Journey, 2018) makes fine use of her own experience as lawyer-turned-psychotherapist to lay out an intricate, twisty plot that maintains a steady pace. Sarah is a complex character, still working her way through PTSD from Miriam’s death, conflicted about her paranormal visitations from Miriam, and simultaneously navigating two romantic relationships, one of which is with her wealthy former husband. There is a satisfying skewering of managed care health insurance, enough bad guys to provide tension and keep readers guessing, a few psychopathic patients to add to the danger, and a group of analysts still working out their own issues.

A well-plotted thriller with a likable, female protagonist strong enough to be featured in her own series.