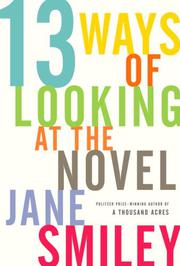 THIRTEEN WAYS OF LOOKING AT THE NOVEL

Bracing literary criticism from a practitioner’s point of view.

Bogged down in the midst of writing a novel she didn’t much like, fearing at age 52 that she was running out of inspiration, Smiley (Horse Heaven, 2000, etc.) decided in 2001 to read 100 novels—not a “Hundred Greatest,” she is quick to stipulate, “only a list of individual novels that would illuminate the whole concept of the novel.” The resulting book offers 12 chapters on various aspects of the form (“The Origins of the Novel,” “The Novel and History,” etc.) and a 13th with 101 short essays on individual titles (Jennifer Egan’s Look at Me got added after Smiley read it on a post-project vacation). Naturally, the author’s selections and judgments reflect her sensibility and artistic convictions. She’s capable of appreciating a modernist classic like Ulysses, but she writes far more enthusiastically about other works, from The Princess of Cleves to Zadie Smith’s White Teeth. Whether praising or damning—The Great Gatsby is among the books that get severe though never nasty appraisals—Smiley approaches literature in a refreshingly direct, unpretentious way. She considers Lady Murasaki and Boccaccio her peers just as much as John Updike and Ian McEwan; you never forget in her down-to-earth assessments that novels are written by and about human beings. She likes Daniel Defoe for “his habit of giving advice and yet forgiving his characters’ trespasses”; she dislikes Henry James’s “prissy, domineering manner.” There are funny, apt phrases on every page, and Smiley’s analysis of the novel’s evolution over a millennium is cogent and convincing. Her “case history” of Good Faith (2003), the manuscript whose bumpy progress prompted her 100-novel intermission, offers a fascinating look at the working writer’s life. What ties together the casually organized text is Smiley’s profound love for her chosen genre, an art form she believes is accessible to everyone because “the novel is based on the most primal human materials, emotion and language.”