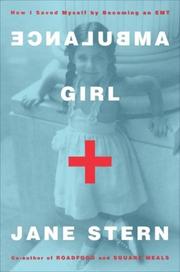 How I Saved Myself By Becoming an EMT

A witty, self-deprecating account of how becoming a volunteer emergency medical technician transformed a reclusive, depressed hypochondriac into a vibrant whole woman.

Co-author with husband Michael of numerous books on food and pop culture (Dog Eat Dog, 1997, etc.), a columnist for Gourmet magazine, and a contributor to NPR’s The Splendid Table, Stern at age 52 appeared to be a woman of accomplishment. She describes herself, though, as clinically depressed, claustrophobic, and floored by panic attacks. Her decision to become an EMT was, she says, a spur-of-the-moment act, taken after a couple of months of psychotherapy and treatment with antidepressants. It also seems driven by the desire of this urbane, well-traveled outsider to become an accepted part of her largely blue-collar New England community. During months of thrice-a-week classes, mostly with fit young firemen and police trainees, overweight, overage, and overeducated Stern struggled hard to fit in, at times losing her dignity, but not her sense of humor. Once certified as an EMT, she faces some real-life tests. The claustrophobic writer dreads riding in the back of the ambulance, but of course she must, and with a couple of drunken, bleeding motorcyclists to care for she doesn’t have time to be afraid. Her fear of dead people is challenged when she is confronted with her first corpse: fat, naked, blue, and covered with Cheerios. And on it goes, through fires, accidents, and domestic crises, until the day Stern sees someone she knows become a virtual vegetable after an EMT rescue. Questioning the value of heroic saves, she begins again to sink into depression, coming out of her funk only after the events of 9/11 make her see rescue workers as a noble brotherhood. In the end, she achieves her goal and closes her account of self-transformation with the joyous announcement: “I am a part of something at last.”

Funny yet moving, a midlife crisis tale with all the elements of a TV movie of the week.