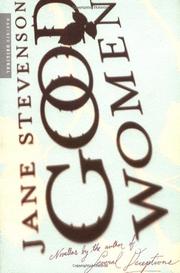 British novelist Stevenson (The Empress of the Last Days, 2004, etc.) returns to the novella form of her first book.

Three short fictions make up this new work, each focused on the shortcomings of its female central character, as ironically pointed out by the title. None of these heroines is conventionally good, although the first, Freda, is highly skilled in bed. Stevenson treats them all with a degree of disdain, differentiating their failings in stories distinguished by brisk narration, old-fashioned craft (and content), a dash of predictability and a cool attitude to all concerned. In each, the home symbolizes money, class and social striving, and is the setting for brooding mischief before an explosive finale. “Light My Fire” is narrated by architect David, whose all-consuming affair with Freda leads to marriage and the purchase of a ruined, 16th-century Scottish tower-house, the refurbishment and sale of which will fund the couple’s move to London. But the union splits apart with a bang after Freda commits an act of folly. “Walking With Angels” showcases another ruptured household, this time the less affluent home of Wenda and Derek. When Wenda starts to see angels—or are they hallucinations brought on by a mental disorder?—and wants to set up a New Age business to channel their positive energy, the dilemma of who holds the purse strings brings about a violent rearrangement. “Garden Guerrillas” sees a slight softening of attitude as Stevenson returns to the middle class, with widowed Alice rediscovering her decisiveness when resisting her son and pushy daughter-in-law’s attempts to oust her from the valuable family home and its beloved garden. Alice retaliates by planting invasive roses and bamboo supplied by an old flame.