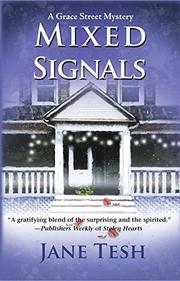 A North Carolina private eye and his psychic pal combine their talents to solve a murder.

David Randall, who’s in love with his fellow boarder, Kary, a college student who wants to help with his detective work, awaits his mother’s Christmas visit with mixed feelings because he knows she’ll want to talk about the death of his daughter in a car crash. In the meantime, his landlord, Camden, finds his friend, Jared Hunter, who’s been released from jail after his conviction for his part in a local museum break-in, dead in a pool of blood. Violent flashbacks make Cam feel that he’s connected to the killer. In addition to investigating the murder, David is vexed by a series of robberies that proceed apace despite the appearance of a clumsy superhero who calls himself the Parkland Avenger. Ambitious reporter Brooke Verner of the Parkland Herald, whose editor’s institutionalized son had served time along with Jared, is on the case of the Avenger. Branching out on his own, David discovers that the thieves are using a network of tunnels under the old part of town. As his mother continues her efforts to get David to talk about his sorrows, Kary joins a local superhero group that denies that the Avenger is a member, and Cam continues to have debilitating psychic revelations. Will David solve the murders and robberies in time to provide a merry Christmas? Randall's second appearance (Stolen Hearts, 2011) combines a solid mystery with a plethora of suspects and quirky regulars.