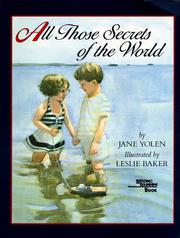 ALL THOSE SECRETS OF THE WORLD

In a gracefully cadenced text with telling echoes of ideas and images, an apparently autobiographical story: when Jane is four, she and her family see Daddy off on a crowded troopship to WW II; only Mama cries. Soon after, on a forbidden trip to wade in the nearby Chesapeake, Jane's five-year-old cousin Michael demonstrates that the small-looking ships they see are actually big, like Daddy's—Michael moves away while Jane compares his size to her own hand. Two years later, Daddy comes home. "Everyone cried, except Mama," and Janie tells him why she seems bigger: ". . .you were so far away, Daddy. When you are far away, everything is smaller. But now you are here, so I am big." In her best work to date, Baker's watercolors capture the nuances of affection, loss, puzzlement, and jubilation in her characters' expressions and stance, echoing the sorrow of war's partings in the dramatic dark areas of her careful compositions, nicely contrasted with summer's blues and greens. A poignant, beautifully wrought book. (Picture book. 4-8)