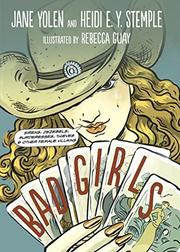 Brief, breezy profiles of women who committed crimes, from Delilah to Catherine the Great to gangster moll Virginia Hill, with comic-strip commentary from the authors.

With a conversational style, the mother-daughter team of Yolen and Stemple recap the crimes and misdeeds of 26 women and a few girls in this jaunty collective biography. After each two-to-four–page biographical sketch and accompanying illustration of the woman, a one-page comic strip shows the authors arguing about the woman’s guilt. The comic-strip Stemple typically comes down on the side of “guilty” or, in the case of Cleopatra marrying her brother, “icky.” Yolen tends toward moral relativism, suggesting the women acted according to the norms of their times or that they were driven to crime by circumstances such as poverty or lack of women’s rights. Thus, strip-teasing Salome, who may have been only 10, was manipulated by her mother into asking for John the Baptist’s head on a platter. Outlaw Belle Starr was “a good Southern girl raised during difficult times.” While the comic strips grow repetitive, the narrative portraits, arranged chronologically, offer intriguing facts—and in some cases, speculation—about an array of colorful figures, many of whom won’t be known to readers.