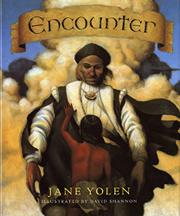 A poignant account of Columbus's landfall in the Americas, from a Taino boy's point of view. After a terrible prophetic dream, the lad begs his elders not to welcome the strangers, but they disregard him. He sees how they look at his people's gold; he temporarily becomes their captive; and at the end, as an old man, he sadly notes: "We lost our lands...we gave our souls to their gods...our sons and daughters became their sons and daughters, no longer true humans...." Shannon's dark, richly colored paintings brilliantly capture the story's emotion and the sense of worlds colliding; Europeans are rendered with a rugged realism that strongly recalls the work of N.C. Wyeth, and the Native Americans look like polished wooden figurines— with the border between these two realities shifting and changing. The author closes with a historical note, while the illustrator ends with an apology for adding loincloths to his figures. O tempora! O mores! (Picture book. 9-12)