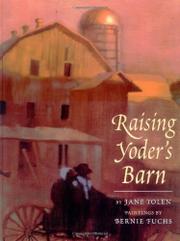 A celebration of the Amish spirit of community summoned for a one-day barn raising. Lightning-struck, the Yoder family’s barn burns to the ground, but before the week is out neighbors gather and, under the direction of grave, gray- bearded Samuel Stulzfoot, put up a new one. Too old to join the children, too young to help the men, eight-year-old Matthew is disheartened at being left out, until Stulzfoot enlists him to carry instructions to the builders. Yolen (with Bruce Coville, Armageddon, p. 975) frames Matthew’s narrative in rhythmic, literary cadences—“fingers of flame grabbed at the barn. The sky filled with blue ropes of smoke; a boy could climb them up to Heaven, if he were so willing”—that give the event a ritualistic air. Fuchs applies paint so thinly that the texture of the canvas becomes part of each scene, while the dominant colors are stately, opaque red-browns. The dimly seen background shapes and slightly unfocused foreground figures are seen in a russet light that looks smoky in firelit scenes and gives later ones a summery haze. The details of barn construction are passed over, but the central place a barn occupies on an Amish farm is clearly established. (Picture book. 6-8)