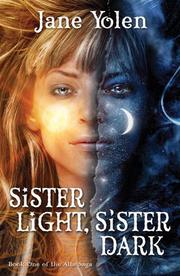 Insubstantial far-future adult fantasy, and first of a series, from well-known YA author Yolen. In the distant future, groups of women have banded together in self-sufficient, fort-like "hames" whose populations are maintained by adoption. Here, girls train to be farmers, cooks, medics, warriors, etc., and, under the guidance of the White Goddess ("Mother Alta"), practice moon-magic: chiefly, the conjuring of dark sister-twins from special mirrors (the dark twins materialize only in moonlight or torchlight). A certain ancient prophecy concerns the Anna, a sort of avatar who is destined to destroy the existing society and usher in a new. Young Jenna, who—unusually—has long white hair, shows signs of being the one prophesied, but the harsh old priestess of Selden Hame will have none of it. Jenna and her friend Pynt journey to another hame as part of their coming-of-age rituals; on the way they rescue Carum (a prince, as it later turns out) from vile death at the hands of Barnoo the Hound, one of ambitious Lord Karas' monstrous bruisers. They seek refuge at Nill's Hame, but soon, as Jenna and Carum flee, the hame is attacked and destroyed. The dark twin idea is unusual, yet Yolen does nothing with it. As for the rest: thin and creaky as an old wagon wheel, it just about rolls along.