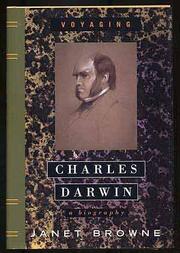 This first volume of a definitive new Darwin biography is full of insight into both the man and his era. Browne (History of Science/The Wellcome Institute, England) draws on her background as an associate editor of the eight- volume edition of Darwin's correspondence. In his early years, Darwin showed no great ambition; the youngest son of a country doctor, he was an unmotivated medical student in Edinburgh, and a Cambridge scholar nominally studying for the ministry. The opportunity to sail with HMS Beagle in 1831 came more or less out of the blue; he was invited to act as a gentleman companion to its neurotic young captain, Robert Fitzroy, as much because of his respectable family background as because of his connections in the Cambridge naturalist community. But motivated now by the chance to observe nature directly, Darwin made the most of it. Browne devotes considerable space to his eye-opening experiences in South America, the Gal†pagos Islands, New Zealand, Australia, and South Africa—giving a remarkable picture of life at sea as well as of the scientific explorations. Returning to England, Darwin quickly made important scientific friends, who were impressed both by his collections and by his quick mind. But it was only slowly—after a closer study of the finches he had found in the Gal†pagos and after his reading of Malthus's population theories—that his theory of natural selection took shape. At first, especially after his marriage to his conventionally pious cousin Emma Wedgwood, Darwin was afraid to do more than hint at his speculations, and then only to trusted scientific colleagues. But as he became more sure of the meaning of his data, he realized that he was obligated to make his findings public. The book closes in 1856, as Darwin is preparing to write On the Origin of Species. An exciting and richly evocative portrait of one of the most important thinkers in scientific history that leaves the reader wishing the second volume were already on hand. (48 pages photos and 4 maps, not seen)