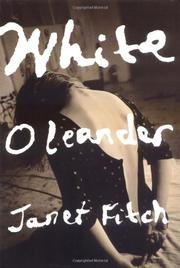 A first-rate debut about a teenaged girl’s arduous six-year journey of self-discovery. Astrid is 12 when her beloved mother, the poet Ingrid Magnussen, murders a former lover and is sent to jail. Her father long gone, Astrid ends up in foster care, moving through dysfunctional households across southern California. Only Claire Richards, actress wife of a wealthy TV producer, seems to offer a real family life as she nurtures Astrid’s academic and artistic abilities. But the Richards home has deep emotional fissures, skillfully exploited by Ingrid, who keeps jealous watch over her daughter by letter. Weak, neurotic Claire succumbs, and Astrid’s last foster home is a chaotic crash-pad overseen by a Russian immigrant engaged in various semi-legal hustles. Meanwhile, Ingrid has become a feminist cause cÇläbre with naive young disciples and a media-savvy lawyer working to get her a new trial. The embittered Astrid wants no part of this effort, and in a jailhouse confrontation challenges Ingrid to prove that she regrets her destructive role and will try to make amends for the hard times she’s caused her daughter. Despite melodramatic plot twists, the foster homes provide a nicely eclectic panorama of late 20th-century American life and a revealing stage for Astrid’s growth and personal struggles. She’s an appealing protagonist, smart and vulnerable, though her formidable mother is even more intriguing, and the author brilliantly delineates the woman’s complexity through her letters, which are masterpieces of epistolary voice and character development. Fitch displays remarkable artistic and psychological maturity throughout, skillfully making use of metaphors (like the beautifully poisonous oleander, Ingrid’s signature flower) to illuminate her central theme: the longing for order and connection in a world where even the most intimate bonds can be broken in an instant. The author allows her protagonist to achieve adulthood, love, an artistic vocation, and some semblance of inner peace without scanting the scars she will always carry. Vigorous, polished prose, strong storytelling, satisfyingly complex characters, and thoughtfully nuanced perceptions: an impressive debut indeed.