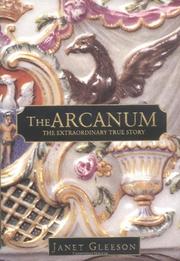 The often exciting—and always absorbing’story of the European development of the formula for making fine porcelain and the growth of the Meissen works that led the way. The “arcanum” usually refers to the age-old quest for a recipe for turning base metals into gold. Gleeson uses it appropriately here not only because porcelain became known as “white gold” in 18th-century Europe, but also because Johann Frederick Bîttger, the alchemist who first created European porcelain, had originally set out to make gold. Having rashly claimed—and “demonstrated”—that he could do so, Bîttger was imprisoned in 1701 by the greedy Augustus II, king of Poland and elector of Saxony. Augustus, whose appetite for women and riches was legendary, held Bîttger for decades; while his gold-making experiments failed repeatedly, he was given the task of discovering the ancient Chinese secret of making porcelain. Bîttger eventually did make fine white porcelain from gray clay, prompting his “ironic testimony” above his laboratory door: “God . . . has made a potter from a gold-maker.” Never granted his freedom, Bîttger was made head of the king’s porcelain factory at Meissen. Gleeson traces the history and development of porcelain artistry from there by following the careers of the mean-spirited Johann Gregor Herold, an artist whose inventive colors and patterns set the standard, and the sculptor Johann Joachim Kaendler, whose fine work in 1730s Dresden would bring about a bitter rivalry with Herold. The sublime results of their competitive work can still be viewed in the museums of Dresden and Meissen. Gleeson does a marvelous job of relating court intrigue, decadence, and chicanery; but her descriptions of 2,200-piece dinner services and the lavish banquets on tables decorated by porcelain finery, including an eight-foot-high model of the Piazza Navona with running rosewater, steal the show. (Author tour)