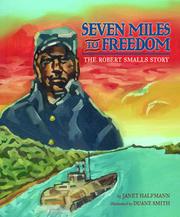 The daring Civil War escape of a slave, his crew and their families in a stolen Confederate supply boat receives appropriately inspirational treatment in this new picture book. Robert Smalls grew up in Beaufort, S.C., distinguishing himself to his owners as a bright, likely young man. Working on the docks, he quickly learned seamanship, a skill he put to the test when, as wheelman of the Planter, he used his knowledge of the Confederate’s whistle signals and the opportunity presented by the onshore carousing of the white members of the crew to slip through the harbor to freedom. Halfmann tells the story slowly at first, laying out both Smalls’s abilities and the yearning for freedom that only increased with his marriage and subsequent fatherhood. Smith, a newcomer to picture books, sketches out scenes and characters with broad daubs of oil, creating a sculptural effect that heightens the monumental nature of Smalls’s deed. Page turns and textual pacing combine to relate the actual escape with pulse-pounding excitement; readers’ relief at Smalls’s success is almost physical. A triumph. (author’s note, bibliography) (Picture book/biography. 6-11)