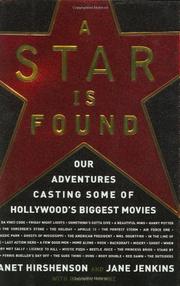 A STAR IS FOUND

Our Adventures Casting Some of Hollywood’s Biggest Movies

Hollywood star-makers Hirshenson and Jenkins debunk that myth and many others in their from-the-trenches memoir. Times have changed since the studios made casting decisions in-house and moguls bedded their wannabe starlets in exchange for plum roles. Today, according to these longtime professional partners, it’s all business in the female-dominated, mostly freelance casting profession. In fact, filling the roles of a major film takes many arduous months and poses more maddening possibilities than a Sudoku puzzle. “Casting is a complicated, delicate, and almost alchemical business,” they write. “To be a good casting director, you need instinct, patience, and the ability to remember hundreds of diverse faces, voices, and performances.” Hirshenson and Jenkins are tops among the approximately 700 casting directors and associates working in the U.S. Their filmography, which includes everything from The Outsiders to The Da Vinci Code, indicates why they are among the most sought-after in the business; they have given first star turns to unknowns like Julia Roberts, Tom Cruise and the Harry Potter kids. But even the most astute talent scouts can make missteps: The pair admits to passing on future Oscar-winners George Clooney and Kevin Spacey. Among the most riveting vignettes are those from the strange and rather perverse field of children’s casting, where Hirshenson and Jenkins first encountered such eventual above-the-marquee names as Leonardo DiCaprio, Winona Ryder and Scarlett Johansson. Though the authors’ tales are often engaging and illuminating, their prose is pedestrian, and they can be sloppy, referring to Oscar nominee Laura Dern as an Oscar-winner and misspelling Steven Spielberg’s name multiple times.

Juicy tidbits for the armchair casting agent. Readers will devour this tome for its behind-the-scenes dramas, if not literary merit.