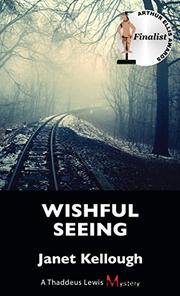 In 1851, a Canadian minister with a penchant for solving mysteries is suddenly involved in one that will change his life.

Thaddeus Lewis, a saddlebag preacher, has just landed a plum circuit whose perks include a large manse in the growing town of Cobourg, the services of an assistant, James Small, and the pleasure of the company of his 15-year-old granddaughter, Martha Renwell, who acts as his housekeeper. The construction of the Cobourg to Peterborough Railway has the area bubbling with hopes of prosperity, raising the value of land and providing employment for the surrounding farms and small towns. At a camp meeting, Lewis meets many of his new flock as well as some who have come along to be entertained. There he makes the acquaintance of George Howell and his wife, Ellen, whose blue dress reminds Lewis of his late wife. Howell is not well-liked, and when Ellen is arrested for murder after her husband vanishes, Lewis feels he must help her. To that end, he finds a young lawyer willing to work for free to enhance his career. Martha finds Mr. Townsend Ashby—clever, handsome, and well-off—attractive and fascinating, much more appealing than James Small, an unwelcome suitor who’s been pestering her with his attentions. Lewis, who’s already been instrumental in solving several murders (The Burying Ground, 2015, etc.), pitches in with Martha to collect local gossip and other clues in an attempt to find the real killer. George, whom Lewis suspects as a counterfeiter, remains stubbornly missing, and his young daughter, who’s hiding on their farm, disappears whenever people come to look for her. It will take a climactic trial to bring the case to a close.

An appealing look at life in mid-1800s Canada, full of historical detail, engaging characters, and a murder investigation that takes many surprising twists and turns before it can be solved.