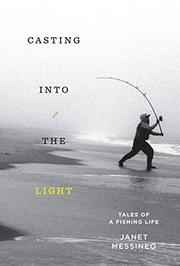 CASTING INTO THE LIGHT

Tales of a Fishing Life

A tackle box full of fishing tips, memories, histories, anecdotes, taxidermy, and even recipes from an angler who found focus and purpose for her life among her fellow fishermen on Martha’s Vineyard.

Though the location suggests a life of leisure among the privileged elite, Messineo endured a hardscrabble upbringing and found herself among the outsider artistic community, working as a waitress and overindulging in drugs and alcohol. Fishing likely saved her life, or at least gave her one, though she doesn’t belabor the redemptive spirit as much as the title suggests. The author also doesn’t wax too poetic, at least once she moves beyond the introduction, where she describes fishing as “the meditative place similar to where gardeners go when they kneel in the dirt and dig their fingers in the soil….Standing in the surf, casting my lure toward the horizon, I feel like I am the woman I’m meant to be….My life becomes meaningful and I feel part of my surroundings.” Comparatively, the rest of the memoir is more nuts-and-bolts description: how and where the author learned to fish, how she went from feeling like an intruder to being accepted as a rare woman in a sport dominated by men, how the ethics and competition of fishing have changed—and how cheaters have occasionally rigged that competition and gotten away with it. Messineo writes about lucky sweaters and about how unlucky bananas are for fishermen. She touches on her marriages and the son she and her husband have adopted, and she treads lightly on the schizophrenia of her fishing mentor, who eventually succumbed to suicide. Whereas many fishing memoirs are often more literary, turning that time with nature into a spiritual pilgrimage and the art of fishing into a metaphor for life, this is more about fishing itself, written for readers who like to fish or think they might like to learn.

A chronicle of a life in fishing by an author who seems like good company.