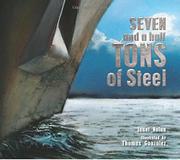 SEVEN AND A HALF TONS OF STEEL

A reverent account of the creation of a seagoing 9/11 memorial fashioned by incorporating part of one of the fallen towers into the hull of a Navy ship.

Following a wordless, powerful sequence in which a seemingly ordinary jet flies peacefully through a cloudless sky and then directly into a tower, Nolan opens by noting that there is “something different, something special” about the seemingly ordinary USS New York. In the tragedy’s aftermath, she explains, a steel beam was pulled from the wreckage and sent to a foundry in Louisiana. There, workers melted it down, recast and shaped it, and sent it to New Orleans, where, notwithstanding the destruction wrought by Hurricane Katrina, it was incorporated into the bow of a new ship of war. Gonzalez echoes the author’s somber, serious tone with dark scenes of ground zero, workers with shadowed faces, and views of the ship from low angles to accentuate its monumental bulk. Though Nolan goes light on names and dates, she adds a significant bit of background to the overall story of 9/11 and its enduring effects. Backmatter includes a cutaway diagram and some additional facts.

A deeply felt but not overwrought telling of a story that will be new to most young readers.