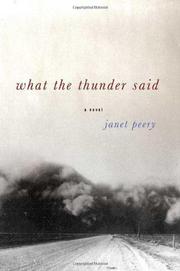 WHAT THE THUNDER SAID

The complex relationship of two sisters who grow up, then apart, on an Oklahoma farm during the 1930s is grittily etched in the Virginian author’s second novel (after The River Beyond the World, 1996).

It’s essentially two distinct books that fit together without much success. In the first, partially crippled Maxine “Mackie” Spoon endures her disability and her quick-tempered sister Etta’s eccentric misbehavior, until it becomes clear that Etta will steal from her the affections of Audie Kipp, the orphaned Indian youth hired to help their widowed father, McHenry, keep his farm operating despite years’ worth of damaging dust storms. Secrets split the family apart: the accident that caused their mother’s death, the identity of the father of Etta’s baby, the guilt borne by McHenry for the death of his brother many years earlier and the hidden truth about Mackie’s paternity. The narrative then concentrates on Mackie’s odyssey away from her kin, her disappointed love for a taciturn married man and the independence with which she learns to shield herself from the claims of numerous relationships. “Book Two” subsequently employs several (only gradually identified) observers and narrators whose encounters with the primary characters disclose what has happened to the Spoon girls and the stoical Audie in the decades following their separation. Peery writes beautifully about the intricate demands of farm life and the arduous process of adapting to a harsh and unpredictable climate, and her characters have the imposing solidity of figures painstakingly carved from unyielding substance. At its best, the novel recalls Josephine Johnson’s Pulitzer Prize–winner Now in November, the bleakly lyrical fiction of Elizabeth Madox Roberts and, in passing, Wuthering Heights. But the puzzle presented by its patchwork second half diffuses tension built up earlier, and even readers absorbed in its particulars may have trouble staying its gnarled course.

Less than fully achieved, but a book of considerable strength.