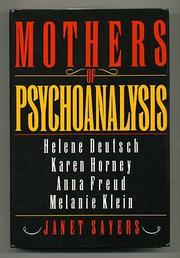 A notable, if occasionally impenetrable, attempt to trace the shift of psychoanalysis from a patriarchal to a matriarchal emphasis by analyzing the lives and works of the most prominent female successors to Freud. Wary of the ``one-dimensional'' mother-centered bias of contemporary psychoanalysis, Sayers, a British psychotherapist, insists that close study of the works of pioneering female psychoanalysts Helene Deutsch, Karen Horney, Anna Freud, and Melanie Klein reveals that ``in drawing attention to mothering, they seldom lost sight of the patriarchal determinants of our psychology.'' Nevertheless, their own experiences as mothers, albeit secondhand in Anna Freud's case, led to a radical transformation of the Oedipal scheme and a new awareness of the effect of social factors on the individual psyche. For Deutsch, this took the form of the first discrete analysis of women's psychology as well as path-finding studies of narcissistic personality disorder. The more iconoclastic Horney, attacking ``penis envy'' with her countervailing description of ``womb envy,'' went on to co-found (with Erich Fromm) the sociologically based ``culturalist'' school of psychoanalysis. Concentrating on child psychology, Freud used her wartime nursery experience to focus on different therapeutic approaches to children, while Klein pioneered play therapy, object-relations theory, and the treatment of schizophrenic and autistic patients. The biographical approach here allows Sayers to note the apparent direct correlation between the thinkers' favorable view of their own fathers (adored by Deutsch and Freud; disdained by Horney and Klein) and adherence to a strict Freudian line. At the same time, the narrative's fragmented structure, with each figure discussed separately, prevents a sustained analysis of the interrelations between four women who all knew (and frequently battled) one another. And Sayers's references to ongoing controversies in the field may prove confusing to a general audience. Ambitious and often penetrating, a laudable effort to explain the origins of, and restore balance to, current psychoanalytic debate. (For a complementary study of early male successors to Freud, see Phyllis Grosskurth's The Secret Ring, p. 1134.) (Photographs.)