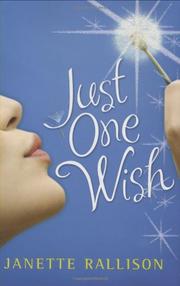 When 17-year-old Annika’s younger brother is diagnosed with brain cancer, her family’s world flips upside-down. Used to always being in control, Annika steps up and hatches a somewhat flimsy plot that she believes will improve her brother’s chance of survival. To carry out her plan, however, she needs the assistance of heartthrob Steve Raleigh, the actor who plays Teen Robin Hood in her brother’s favorite TV series. Taking an impromptu road trip with her best friend, Annika crashes the Robin Hood set and draws on all her skills—abetted by lots of luck—to convince the hunky star to help her in granting her brother just one wish. Told in Annika’s voice, which is indistinguishable from the rest of the chick-lit pack, this text aims for laughs but falls short, instead striking a sentimental, though not mawkish, chord. Although at times over the top, this comedy is a modern-day Robin Hood story itself, complete with unbelievable romance, hammy action scenes and only the best of intentions. (Fiction. YA)