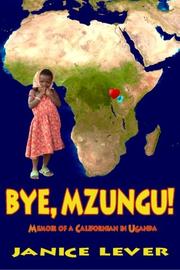 In her debut, an American teacher offers vivid, warm recollections of her 18 years in Uganda.

In 1987, Janice Lever packed two suitcases and headed for East Africa, knowing little about where her journey would eventually take her. When a Kenya-based secretarial position she’d expected to fill failed to materialize, she crossed the border into Uganda. Her Baha’i faith led her to become the headmistress at Auntie Claire’s Kindergarten, a Baha’i school whose founder had sustained it through the country’s recent wars. Lever recounts her tale using a combination of journal entries, letters home and personal recollections. “Mzungu” is the Swahili word for “stranger,” a common nickname for white foreigners in Uganda and a word that Lever heard often. Lever writes about how, like many expatriates, she doubted the wisdom of her decision more than once. But with her beliefs, perseverance and openness to the unexpected, Lever found a home in Uganda. Her deep affection for the country comes through in this book, even in the seemingly tedious details of running a school, applying for work permits and communicating with the local water board. She also tells of more hair-raising adventures, as she and her staff battled with thieves, leaking roofs and a battered 1966 Fiat. The book will also provide readers with a pleasant introduction to the Baha’i faith. With its clear, straightforward detail, Lever’s tale will draw many readers into the joys and frustrations of life in post-war Uganda.

An exciting memoir detailing the author’s many adventures while teaching Ugandan children.