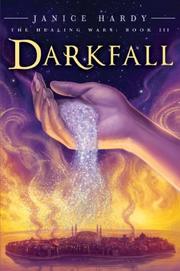 From the Healing Wars series, volume 3

In this final installment of The Healing Wars series, warrior Nya desperately searches for her missing sister while fighting to preserve her heritage even as the Duke of Baseer prepares to invade Geveg.

Fifteen-year-old Nya, her sweetheart Danello and compatriots in the underground resistance hide on a farm after Nya destroys the Duke’s palace in Baseer by flashing pain. Notorious for her unique ability to shift and push pain, Nya secretly returns to Geveg hoping to find her sister, Tali. When a corps of Undying, the Duke’s mindless soldiers trained to endure and inflict pain, attack Nya, Tali is among them. Devastated to discover her alien, brainwashed sister, Nya fears Tali will never be the same. With the Duke’s forces approaching, Nya’s reputation as a fighter rallies Geveg’s embattled citizens, who embrace her as the leader they desperately need. Tempted to take Tali and flee, Nya can’t deny her heritage and, with help from her friends and allies, reluctantly prepares to defend her city. A conflicted, complex heroine to the end, Nya anguishes over the potential pain and death she will trigger to preserve what she loves. Though lacking some of the punch and rapid-fire excitement of the first two volumes, the finale offers suspense, resolution of prior wrongs, the sweetness of first love and a battle-tested heroine who fights with her head and heart. (Fantasy. 10-16)