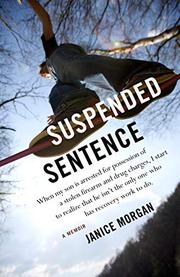 Morgan recounts her struggles to mother a troubled man in this debut mental health memoir.

As a single mother of an adolescent boy, Morgan reminded herself to pay close attention, knowing Dylan—like all sons—would change as he grew older. It wasn’t until June of 2011—when the then-23-year-old Dylan was arrested for firing an illegal gun after a party and was then also found to be growing marijuana in his apartment—that she realized just how far he had drifted from the boy she knew. Morgan, a college professor, was at first horrified by the impending gossip sure to spread through the small conservative Kentucky town, but she began to consider the warning signs: Dylan’s struggles with bipolar disorder, his DUIs, his refusal to find a job. After some cajoling, Dylan agreed to enter a Drug Court program that would help him avoid his three felony charges, though he only had one shot. Any mistakes would have landed him in jail. To ensure that Dylan completed the program, Morgan realized she needed to change strategies—to be more understanding of her son’s mental health and addiction problems, while not being too lenient. Morgan was forced to also consider her own co-dependency and find a path through the minefield of motherhood to save both her son and herself. Morgan’s prose is ruminative and laden with imagistic language: “For a long time, while my son was very young, I thought he was a smaller version of Attila the Hun. I thought he had only three settings on his dial: brash, bold, and barbarian.” Dylan is a difficult, often infuriating figure, and Morgan confronts his issues (and her own) with candid, sometimes-painful self-awareness. Her accounts of the justice system and rehabilitation are illuminating, and while the details sometimes overwhelm, the reading experience manages to capture the immense frustration that she (and others) no doubt felt. If memoirs exist to depict how some navigate situations that others can’t imagine, this one is a great success.

A frank, earnest memoir of the difficulties of parenthood.