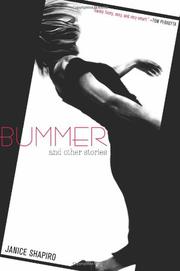 As you can tell by the title, bad things happen to the characters in this collection of stories—but somehow they cope.

The title story begins “Man, I was having a bad day,” and this mantra summarizes the life of many of the women Shapiro focuses on. Here 21-year-old pregnant Alison plans a Vegas wedding with boyfriend Sean, but he only agrees to it if they can have a Fear and Loathing theme. They drive across the desert in a rented Eldorado with Sean so strung out he doesn’t know what he’s doing. Alison instead has a one-night stand with someone (Jose? Ramon? She’s not sure...), has beginner’s luck at the blackjack table and finally reaches a reconciliation with Sean. Several of the stories are set in the recent past and reflect the anxieties of those times. In “1966,” a girl and her sister pick up on their father’s cues that he might put a pool in their backyard, but ultimately (and painfully) they realize this is just a fantasy—perhaps a good thing, for the young narrator is irrationally apprehensive in this summer of Richard Speck’s murder of nurses and of students being shot from a tower at the University of Texas. In “Night and Day,” a 40-ish talent agent sleeps with some of the younger actors she represents and poignantly reminisces about her gay mentor Leon, who had drowned seven years earlier. In “Tiger Beat,” narrator Lita surprises herself by taking up with a struggling banana farmer in California and finds “There were dry spells, times I considered lowering my standards only to realize I had none.” The only story that doesn’t work is a sex-and-drug fantasy based on the seven dwarfs. Page, the narrator, has a tumble with all the dwarfs that will have her, but intense emotional pressures break up the group—and Grumpy eventually becomes a mortgage banker.