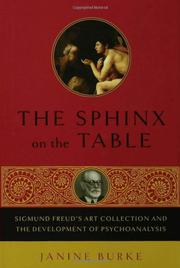 THE SPHINX ON THE TABLE

Sigmund Freud’s Art Collection and the Development of Psychoanalysis

On the 150th anniversary of his birth comes a fresh look at the founder of psychoanalysis as a dedicated collector of antiquities.

Australian art historian and biographer Burke tackles her subject chronologically, introducing Freud (1856–1939) as a three-year-old acquiring the childhood memories on which, she says, he “built the entire edifice of psychoanalysis” and concluding with his funeral in London. Exposed to the glories of art in Paris during the 1880s, when he studied under neurologist Jean-Martin Charcot, he did not become a collector until he was 40, inspired by a visit to Florence in 1896. Over the next four decades, Freud acquired more than 2,000 statues, vases, reliefs, busts, fragments of papyrus, rings, precious stones and prints, which he arranged in a crowded display in his study. He also collected Greek and Roman works, but he had a special passion for the Egyptians. Burke contends that Freud began acquiring Egyptian tomb art while mourning the death of his father and that psychoanalysis and art-collecting developed together, each nourishing the other. Writing during an era of great archaeological discoveries, Freud compared the work of the archaeologist to that of the psychoanalyst, who must uncover layer after layer of dreams and memories before reaching the deepest, most valuable treasures. The author pays particular attention to Oedipus, with whom, she says, Freud identified as a man of destiny, and to the Sphinx, that symbol of troublesome femininity. Burke recounts how Freud’s formulation of the Oedipus complex eliminated the Sphinx (present in the original myth) and argues that his creativity was not scientific but was inspired by the myths and heroic legends of his childhood. Whatever one makes of this analysis, the author has created a rich portrait of Freud’s life in Vienna and his purchasing travels to Italy and Greece.

An intriguing excavation that reveals Freud’s deep interest in archaeology, his distaste for modern art and his acquisitive nature.