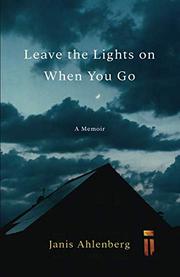 LEAVE THE LIGHTS ON WHEN YOU GO

Ahlenberg recounts the event that transformed her young life—the birth of triplet siblings—and her attempt, as an adult, to come to terms with a waylaid childhood.

In this debut memoir, the author tenderly remembers her early childhood when it was just her parents, Horace and Lorraine, and her younger brother by seven years, Steve. During those “tranquil times,” she says, they all enjoyed “simple travels and adventures.” However, after Lorraine gave birth to three babies, “the towheaded identical girls and the little redheaded boy”—named Marisol, Margo, and Max—everything changed. Indeed, the transformation of the young author’s life started even before her three siblings were born; after Lorraine realized that she was carrying triplets, she informed the young girl—who was only 12 years old at the time—that she was now essentially on her own and expected to raise herself. It turned out that all three newborns required expensive medical care, and their father was in a terrible car crash and later struggled with mental illness—all of which proved to be devastating drains on the family’s already precarious finances. The triplets demanded constant attention, partially due to mental health issues that worsened during their teenage years but also because their parents ceaselessly spoiled them, according to the author. Ahlenberg says that she left home at 18 in order to escape an increasingly chaotic and lonely environment. Her parents refused to pay for her college education, and a “ten-year rift” ensued.

The author movingly describes her later attempt to come home and reconcile with her parents and to recapture the life she once enjoyed with them; she also effectively relates her heartbreaking frustration when she realized that she wouldn’t get that satisfaction: “I’m not going to get the answers I came for.” Overall, Ahlenberg’s remembrance is emotional, deeply thoughtful, and impressively forthcoming. At its best, her prose is poetic in tone, poignantly conveying her profound pain: “My sadness hardened and gathered moss with time and seeped darkly into my bones—a quiet storm that just held steady in my soul, which I’ve gone on weathering every day.” Despite the depths of her frustration, she comes to the conclusion that there’s no obvious villain to blame—hers is a “genuine sorrow over a tragedy that is no one’s fault.” Nonetheless, she frequently and candidly shares her bottomless exasperation with the three siblings who altered her life, asserting that, even as adults, they live in a state of “pure infantile narcissism.” Ahlenberg started a life of her own after leaving home and became, like her brother Steve, an “educated citizen of the world”; she went on to become a wife, a mother, and a practicing psychotherapist. But in the wake of her divorce, she made the aforementioned return home to her parents, which she shares sensitively, without any expressions of cynicism or contempt. Ahlenberg’s personal story is novelistic in its psychological complexity and as gripping as dramatic fiction.

A beautifully told recollection that’s full of introspection and wisdom.