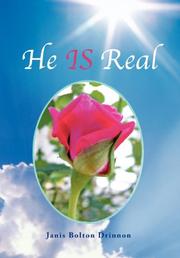 A collection of rhymed poetry inspired by the author’s Christian faith.

This is Drinnon’s first widely distributed poetry collection, following a friends-and-family printing of her last book (In HIS Care, 1998) and several appearances in poetry anthologies. The author gathers poems she wrote over a 40-year span, mostly between the mid-1990s and the mid-2000s. She pairs each poem with a related Bible verse and arranges the Bible verses to look like poetry as well, with deliberate line breaks. She accompanies her poem “Wonders of the Lord,” for instance, with Genesis 9:16, which describes the rainbow Noah saw at the end of the flood, and “Communicate with the Lord” with 1 John 5:14-15, which describes prayer. Several poems (“The Beauty of a Rose,” “His Art”) reflect the author’s fascination with the natural world; in an aside, she explains that her mother, to whom she dedicated the book, taught her to love nature as a part of God’s creation. Other poems (“Our Neglect,” “The Cross Within”) address darker topics but focus on the saving power of faith. The collection concludes with the first poem the author ever wrote, which, she explains, was inspired by a phrase her mother-in-law used to express her grief. Despite the broad span of time reflected in this collection, the poems have a consistent, coherent style. All feature simple rhyme schemes, and although the meters at times seem a bit forced, it doesn’t substantially impair the collection as a whole. The basic rhymed couplets render the poems earnest and unpretentious and produce a collection with a sense of homegrown simplicity. The book will resonate most strongly with readers who share the author’s Christian faith—clearly the driving force behind these poems.

A simple, heartfelt and often charming collection of religious poetry.