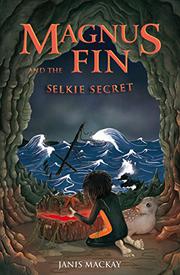 MAGNUS FIN AND THE SELKIE SECRET

From the Magnus Fin series, volume 3

Magnus Fin, half-human, half-selkie, is thrilled when a sea storm washes up a box sure to contain riches.

When he tries to open it though, the box releases a burst of red light that leaves his hand throbbing. Worse, it tears a layer of his human skin to reveal seal skin. With this, two chains of events are set in motion: A news reporter gets wind of Fin’s oddities, and Fin is asked to return the box to King Neptune. After healing his hand, Fin’s selkie grandmother explains that the chest contains a wealth of wisdom desperately needed by Neptune to rule prudently. However, the key has been lost. She asks Fin to keep the selkie secret even as he finds the key and delivers both it and the treasure to the king. The story is a continuation of adventures begun in two earlier books, and children who have not read them may feel lost when Magnus, in his quest, must revisit a monster’s castle that he previously destroyed. Some characters and situations are not fully described, and the environmental theme feels tacked-on here. Even some new plot developments feel slight and their resolutions pat, such as the reporter who decides to do good rather than seek sensation.

Readership may be limited to fans of the earlier Magnus Fin books and those enamored of under-the-sea adventures.