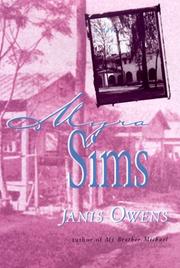 Complementing the story told by Gabe Catts in the author’s much-praised first novel, My Brother Michael (1997), comes the tale of Myra Sims, an abused young woman. This time out, though, Owens narrative doesn—t quite pack the expected punch. Even the revelation by Myra of her father’s rape and transmission of syphilis to her—this when she was 12’somehow falls flat. Her story also begins with the funeral of Michael Catts, her fortyish husband, at which Gabe, Michael’s younger brother, arrives drunk and late. Gabe’s been in love with Myra ever since her family settled in next door to the Cattses in north Florida’s working-class Magnolia Hill. Myra describes how, as a child, she fell in love with the entire Catts family, if only because they were kind and decent. After Myra’s drunken father brutally beat up Mr. Catts, broke young Gabe’s wrist, and then raped Myra (and was arrested), the Simses moved away. Later, grown up and on the way to a promised job, 17-year-old Myra decided to visit the Catts family—and simply never left. She married hard-working Michael, and in another year became a mother. But her difficult past began to oppress her: she grew psychotic, and had to be medicated. While ill, she dallied with Gabe and bore Hinson—but Michael, now a successful businessman, nevertheless forgave her. Terminally ill, he devised a plan to bring Myra and Gabe together, and after some rather strange moments, it worked—like most of the Cattses” schemes. With her story told, Myra feels forever grateful to Michael: for he was the man who taught her to hold her head up. A wryly sweet if underwhelming down-home saga.