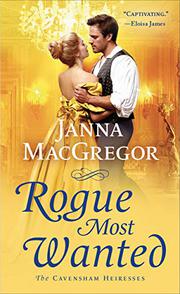 An earl’s daughter raised in the wilds of Northumberland must fight for her title and home with the help of a dashing lord who has sworn off love.

When dementia afflicted her beloved grandfather, the Duke of Ferr-Colby, Countess Theodora Worth stepped in. They retreated to his remote Ladykyrk Estate in Scotland for privacy, where she cared for him and managed his estates until his death. The new duke, Garrett Fairfax, hopes to take Ladykyrk for its mineral stores, but Scottish law allows Thea, a woman, to inherit. A London gossip rag has twisted Thea’s hard work and sacrifice into a malicious story of greed and murder, and the new duke plans to press his claim in the House of Lords. Thea, having lived a secluded and informal existence, seeks help from her kind neighbor, Lady Stella Payne. Lady Payne takes Thea to London to prepare for her interview with the Committee for Privileges and, perhaps, to find a husband to strengthen her claim to the earldom. Lady Payne’s great-nephew, Lord William Cavensham, has sworn off romance since he was jilted years prior. Will makes a big show of being cynical and withdrawn, yet he instantly responds to Thea’s great beauty, bravery, and intelligence and agrees to help her. As their friendship grows, so does their attraction, making for several explicit sex scenes that clash with both Thea’s naïve, sheltered personality and with MacGregor’s (The Good, the Bad, and the Duke, 2018, etc.) otherwise authentic depiction of Regency law, etiquette, and mores. The threat to Thea’s title drags on until it is solved by a simple search that could have been conducted in the first chapter, while she and Will throw up unconvincing reasons that they cannot marry.

This installment of The Cavensham Heiresses ranks well below its predecessors thanks to a slow pace, inconsistent characterization, and implausible motivations.